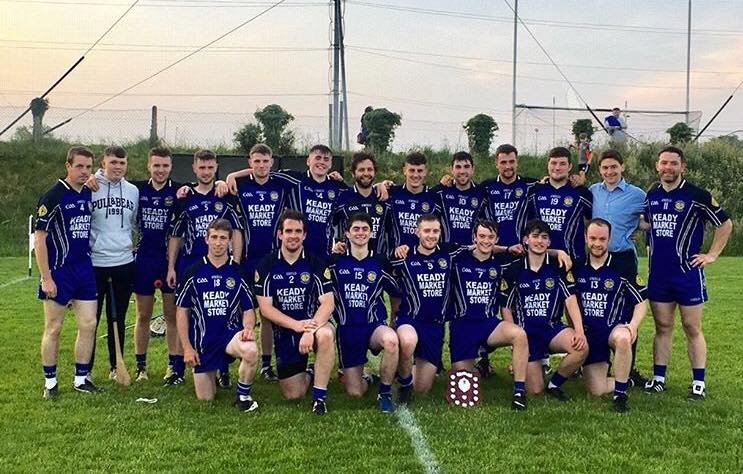 Armagh junior hurling champions Derrynoose came into this game off the back of a great win over Middletown in their recent league encounter fearing nobody and it showed from the start. Cuchulians were first to get on the scoreboard but it was quickly cancelled out by a long range Aaron Fox free followed by a Peter McKearney goal batted past the Cuchulians goal keeper. Cuchulians pulled one back but Patrick McGrane and Kevin McKenna hit two quick points before the Armagh city side managed to close to gap with a goal midway through the first half. Derrynoose fought back with a goal from Patrick McGrane who rifled home from 25 yards. Derrynoose began to get on top of their opponents with 3 unanswered points from Pauric McNaughton, Pearse Lennon and a great effort from Liam McGrane. Cuchulians attempted to peg Derrynoose back slightly with another score but it was all Derrynoose with scores from Aaron Fox, David McCreesh and Conor McGrory. Cuchulians found a lifeline with another goal that could give them hope of a comeback. Derrynoose responded before the break with another point this time from Peter McKearney.

Derrynoose came out running at Cuchulians from the start of the second half, keeping that intensity they brought to the game from the beginning with further points from Peter McKearney and Pauric McNaughton to put more daylight in it. Cuchulians sprung the changes and managed to make a comeback after exchanging points with Pearse Lennon they hit 3 unanswered points. Derrynoose had to find another gear as they were in danger of letting Cuchulians get on top for the first time of the game and they did with a hard worked point from David McCreesh followed by an excellent team goal finished by sharp shooter Conor McGrory into the top corner of the Cuchulians net to restore the 10 point advantage. Cuchulians didn’t lie down and hit the next two points. Pearse Lennon kept the scoreboard ticking over with another point. Derrynoose extended their lead even more with a great goal from David McCreesh who received a long puck out from goal keeper Patrick Kelly, beat every man infront of him and drove low past the Cuchulians keeper. Cuchulians being an experienced senior team managed to work another goal to keep their hopes alive but Derrynoose were the more hungry team throughout and saw the game out with scores from Peter McKearney, Pauric McNaughton and Pearse Lennon to take another scalp off a senior championship team in Armagh within the space of two weeks and collect the McCormack shield for the second year in a row.